You are here: Home / History / Sighting & Naming of Port Stephens

The European history of Port Stephens begins with the voyage of HMS ‘Endeavour’, commanded by James Cook. Cook had been instructed by the Royal Society in London to observe the transit of the planet Venus across the face of the sun, an event predicted to occur on 3 June 1769 in Tahiti. Following the observation in Tahiti, Cook was further instructed [by secret orders] to then search for the legendary great southern land, Terra Australis Incognita.

Following his successful circumnavigation of New Zealand, he turned west and sailed up the east coast of Australia – the first European to do so – naming it first ‘New Wales’ and then ‘New South Wales’ and taking possession of it in the name of King George 111 at an island he named ‘Possession Island’ off the tip of Cape York.

On 11 May, 1770, during the voyage northward up the east coast, Captain James Cook sighted, named and commented in his log book about Port Stephens:

At 4pm, past at the distance of one mile a low rocky point which I named Point Stephens—on the north side of this point is an inlet which I called Port Stephens that appears from the masthead to be sheltered from all winds. At the entrance lay three islands, two of which are tolerable height, and, on the main near the shore are some high round hills, that make at a distance like islands. In passing this bay at a distance of two or three miles from the shore our soundings were from 33 to 27 fathoms, from which I conjectured that there must be a sufficient depth of water for shipping in the bay. We saw several smokes a little distance in the country on the flat land.

Both Point Stephens and Port Stephens were named in honour of Sir Phillip Stephens, who was Secretary to the ‘Lords Commissioners’ of the Admiralty. Cook did not enter into nor examine the port at that time.

Accompanying Cook on the voyage was wealthy naturalist, Sir Joseph Banks, a ‘Fellow of the Royal Society’ who had negotiated a passage for himself and his party of eight. Banks also kept a journal and the following entry is a quoted extract from his journal:

Fair wind continued. Land today trended rather more to the northward than it had done, look’d broken and likely for inlets. At sunset three remarkable hills were abreast the
ship standing near the shore, of nearly equal size and shape; behind them the countrey [sic] rose in gradual slopes carrying a great shew [sic] of fertility.

There is a little- known memorial to Capt. James Cook on an island located just off Port Stephens, Ii is a replica of Cook’s sextant and memorial plaque. 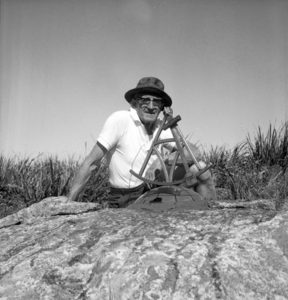 Athol D’Ombrain [pictured], together with some friends, placed the sextant and commemorative plaque on Boondelbah Island on the 200th Anniversary of the day Cook entered into his journal that he had seen “an inlet, which I called Port Stephens that appeared to be sheltered from all winds.

History and Heritage of Tanilba House
Next Post: Research – can you help? 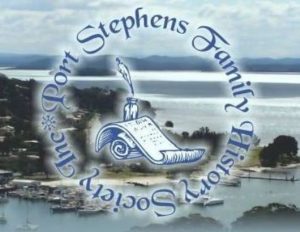